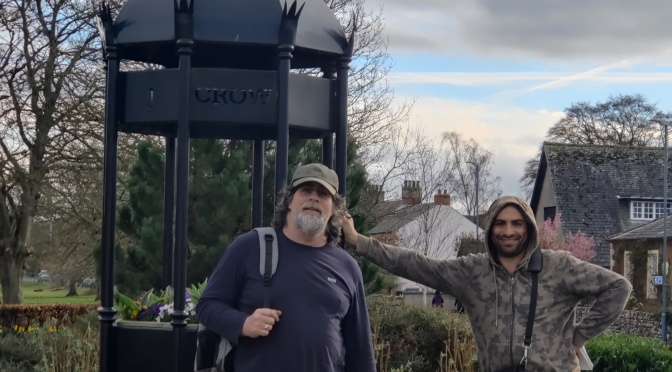 The first English walk for Walk UK takes place just over the border in Carlisle. Its chief essence is a meander with pals beside the gorgeous flow of the River Caldew. It begins at a district of Carlisle call’d Currock, whose stately community centre lies at the junction of Lediard Avenue & Lund Crescent. Park up in the vicinity & ready yourselves for a lovely yomp.

Our walk begins by crossing over the railway via a footbridge. My wonderful hosts for the walk commented on how the bridge is only a couple of years ago & that in the past they approached the bridge with a certain nervousness. ‘”Frankly terrifying!” was one comment about the high noon showdowns with certain members of the teenage section of society in the gaze of flaking graffiti. All good in 2021, tho, & we were soon enough safely over in pristine condition.

We were now in Denton Holme, a slightly edgier side of Carlisle, tho harmless really. “The other day,” remarked my middle-aged literary professor of a friend, “a kid on a bike passed him & warned me that the police were in the area.”

Back on the walk, after passing some houses on the right, you’ll come to the bridge over the River Caldew. Its a great place to be this, as far off in the distance rise the profligate northern reaches of the Lake District, where Carrock Fell & High Pike, absolutely glorious among the English mountains.

As we enter the terraced paradise of Denton Holme’s old industrial centre, my friend regaled me with tales of the good old days, of when the factory owners lived like feudal lords. Then came World War One & the UK government’s decision to chose Carlisle as the testing ground for the ‘State Pub Management Scheme.’ This family-orientated social scheme also saw every pub with a bowling green – there was an old one turned into a wee park in the photo below – & the sport was massive for many years in the city.

Before reform, the general state of public houses throughout the country was far from satisfactory. Most were cramped, overcrowded and unhygienic. The Carlisle experiment was an important moment in the progressive reform of the Victorian pub, with the Scheme being an “experimental laboratory and microcosm of the entire industry” which provided “a tested blueprint for post-­war reconstruction” (David Gutzke in his book, Pubs and Progressives). Carlisle provided the opportunity to experiment in this field. Nearly half the existing public houses were closed, while the rest were radically ‘improved’. There were some initial complaint about the removal of ‘snug’ bars, but the general consensus was that, after a decade, the Carlisle drinkers were satisfied with their regime.

The future of public houses was to lie in commercial exploitation of the pub as a leisure facility with as much profit coming from non-alcoholic ancillaries such as soft drinks, food and games as from alcohol. The pattern was already set, even though it was only as late as the 1960s that it became universal all over the country. Then, in 1973, came the end of the scheme – driven by a Conservative government totally opposed to any forms of nationalisation – & the dawn of the profit-hungry breweries taking over pubs like drunken Tescos.

“All we have to do at the moment is to give the Government such powers as are necessary for the specified purposes for which they ask for them. They ask for them in order to regulate the sale and supply of intoxicating liquor in any area where they think it should be controlled by the State, on the ground that War material is being made, or loaded, or unloaded, or dealt with in transit. That is the primary and the great ground of necessity put forward. It is really in connection with the supply of munitions of war that this Bill is introduced. When the War comes to an end that special necessity will come, to an end; the real reason for the Bill will be at an end, and the sooner we can stop our liabilities in the matter the better it will be.”
Extract from Hansard 5th November 1915

Back to the walk, you are now in the industrial fiefdom of the Ferguson Brothers, loads of lovely houses & factories, whose textile works were opened way back in 1824 & lasted until 1991. One can imagine the now overgrown landscaped gardens were full of workers catching a moments natural beauty & peace away from the ear-splitting roar of the machine floor.

Beyond the factory you enter a wide expanse of space call’d the Holme, with a cemetary climbing up to the right beyond woods full of wild garlic. My hosts explained that from the wild garlic pesto they make they can flavour two months worth of spag bol soup. In the distance, beyond the Holme you will see the famous Pirelli tyre manufacturing plant – head in this direction.

Its now time for a lovely long amble by the River Calder. Watch out for the anglers in their green, rather classy ‘uniforms.’ The journey itself offers various views & vibes, including possible sightings of eegrots – a rare Russian bird -, lucky & edible ‘elf cup’ mushrooms – where water gathers for the fairies – & a seasonal ranarium – a place to rear frogs – which sees one side of the path bubbling with spawn & then later on the same path full of frogs hopping off to the Caldew

Along the walk which my hosts offer’d their own views on living in Carlisle. I know of the town, I studied at the College there in the 1990s – where I met my elder host – & have visited numerous times since – where I’ve met my host’s son. To them Carlisle is a village just like that of Asterix the Gaul – i.e. with no idea of the outside world. From the said outside looking in, Carlisle is a beautiful industrial town cobbl’d onto a romano-medieval city. It is also the biggest railway hub in the world – with lines heading of to Dumfries, Edinburgh/Glasgow, Newcastle, Lancaster/Preston & the famous line to Leeds through the Yorkshire Dales known as the Settle to Carlisle railway.

“Whenever you leave Cumbria,” quipp’d my host, “you really feel it – Wimbledon’s like Bangladesh & London’s like Jupiter!”
“Cumbria’s the Shire & we are its Hobbits” added the son of my host before taking another wicked photograph.

Eventually you will come to a small bridge area over the river. This is an important point of juncture. Crossing & turning left will take you lazily back along the Caldew to the very place you crossed the river early on in the walk. Those of a fitter bent, however, you could continue along the riverside paths to the deligthful time capsule that is Dalston.

After a good mile or so you’ll reach Dalston & enter the village via the graveyard. Beyond the stones lies the village centre where shops & pubs & cafes offer fine Cumbrian nourishment for the eager Walk Uk-er.

This is a locally popular promenading spot, a most beautiful place to walk. For us, cross the Millenium era bridge back over the Caldew & a step back in time to when the Dalston Factory was a real hub of life. Today is a wee Valley of the Kings of industrial memories, & an extremely wonderful place to visit & wander. On the conclusion of which, simply head back the way you came along the Caldew, remembering to take that little bridge about half way back, & return along the opposite bank of the Caldew. 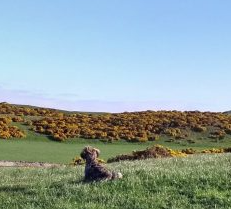